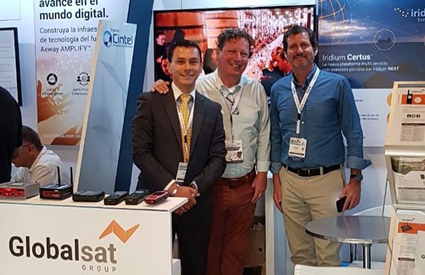 Cartagena de Indias, Colombia. Globalsat, the multinational group of mobile satellite communication companies, was once again present in Andicom, Colombia. In this event, Globalsat Group brought together experts from its regional offices and its strategic partner Iridium to present what is coming in mobile satellite technology thanks to Iridium Certus through its local subsidiary, Globalsat Colombia.

Iridium Certus, the new mobile satellite service, comes into operation thanks to the complete modernization of the Iridium low-orbit satellite fleet, known as the Iridium NEXT constellation. Certus will begin with speeds of 352 Kbps (symmetric in some terminals), which during 2019 will increase to 704 Kbps, surpassing other offers in Band L and presenting an attractive profile for military and civil mobile communications of critical mission, capable of operating even in the poles.

Elkin D. González, Country Manager of Globalsat Colombia, mentions that “both the attractive price of the equipment as well as its mechanical simplicity and the resulting immunity to movement, make the proposal of Iridium Certus generate a great expectation in the Colombian market. Note that Globalsat Group is one of the first 5 companies worldwide to start beta testing of the service using Thales MissionLink terminals, which allows Globalsat to become familiar with Certus early, as well as providing valuable field information to both Thales as to Iridium for the optimization of the experience of the final users “.

Iridium is just one release away from completing the deployment of its new constellation. It is estimated that the pending launch will take place before October, and a few weeks later all the satellites will be in position to provide global uninterrupted service of 352 Kbps, in addition to the total continuity of legacy Iridium voice and data services, including SBD and PTT .

With its presence in Andicom 2018, Globalsat carried out on-site demonstrations of all high-portability satellite solutions for voice, data and also communication-oriented M2M / IoT systems. The mobile and M2M / IoT solutions presented by Globalsat Group are based on the L band (1-2 GHz), which allows voice and data communication with coverage throughout the Colombian territory under any type of critical condition, including earthquakes, rains intense, power cuts and infrastructure falls, using low-weight equipment and low consumption.

In addition to the traditional offer of mobile satellite services, Globalsat Group offers and operates systems with additional layers of security, interoperable satellite PTT (“Push to Talk”) solutions with tactical radios, high portability audiovisual streaming solutions. In addition, Globalsat Group provides, at no additional cost, its self-administration cloud based portal, AirtimeSat, which is ideal for government clients and other mission-critical organizations to efficiently manage their terminals and optimize the use of services to be cost-effective and be available when and where they are needed. All this has been known by the attendees at booth 53 in the exhibitors’ pavilion.

The Andicom event is a meeting point for the regional industry, where business opportunities are generated through networking activities, with a commercial sample attended by decision makers from companies and entities from different sectors. The event has a high-level academic agenda, which allows the transfer of knowledge to participants about the technological trends that define the dynamics of the digital economy.

The group has offices in the continental United States, Colombia, Argentina, Bolivia, Brazil, Canada, Chile, Mexico, Peru and Puerto Rico, as well as distributors in the most important cities of the region.

Recently, Globalsat Group was awarded with the “2018 Top Land Mobility Satcom Innovation Award” by the Mobile Satellite Users Association (MSUA), Globalsat was also named as the “Latin America Satellite Communications Company of the Year” for two consecutive years (2016, 2017) by the international consultancy Frost & Sullivan. For more information about the consortium, visit HTTP://WWW.GLOBALSAT.COM/.