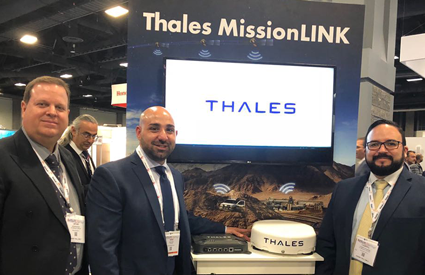 The leading multi country MSS (Mobile Satellite Service) consortium Globalsat Group, based in the US and with offices throughout the western hemisphere, announces it has signed an agreement with Iridium Communications Inc. which establishes the consortium as a global Iridium Certus Launch Partner, effective immediately.

Iridium Certus is an upcoming generation of advanced IP-based services made available globally thanks to Iridium’s new LEO (Low Earth Orbit) satellites, which are currently replacing the Iridium constellation and known as Iridium Next.

Through a unique multi-country presence with emphasis on local expertise, regulatory compliance and user-oriented business practices, Globalsat already plays a key role in market access for Iridium services and hardware. Since Globalsat is also a Cobham Satcom and Thales partner, clients can benefit from simple turnkey offerings which include both service airtime and terminal hardware. Present clients will be able to transit a seamless upgrade path to Iridium Certus and new clients will have full access to current and upcoming technologies with straightforward business propositions directly through Globalsat.

The new Iridium satellites are allowing the constellation to transition from a legacy circuitswitched voice-oriented model to a modern packet-switched and data-centered mesh network in the sky, which will not only provide immediate benefits through a series of new offerings beginning in the following months but, will also enable deeper evolution in the coming years.

Globalsat CEO J. Alberto Palacios comments: “Before Certus, the 500kbps barrier essentially meant the only way to access higher throughputs was through bulky and delicate VSAT terminals. With Iridium’s new entry into a packet-based LEO L-band solution, the relationship between terminal size, power consumption, bandwidth and latency reaches unprecedented levels. The use of antennas with no moving parts which can eventually surpass 1Mbps allows us to provide unprecedented value, in markets which demand increased connectivity and durable terminals anywhere and anytime”.

Iridium Certus terminals and services are set to debut during 2018 with speeds of 352 Kbps, with later upgrades to 704 Kbps and can eventually reach 1.4 Mbps. Certus will also include multiple streaming classes and safety services designed to provide reliable connectivity for varied use cases and environments, ranging from M2M / IoT to streaming media as well as LMR integration, traditional circuit-switched voice and PTT. Furthermore, Iridium plans on becoming the second recognized provider of Global Maritime Distress Safety System (GMDSS) by 2020.

The satellites and ground segment upgrades which make Iridium Certus services possible are designed to be fully backwards-compatible with legacy voice and data terminals and services, therefore current users will not experience service interruptions during the transition period.Portable voice, SBD, PTT and other modes remain fully available and terminals for them are still in production.

Funded in 1999, Globalsat Group is the first Pan-American Mobile Satellite Service (MSS) consortium and a leading provider of voice, data, M2M / IoT, software, and hardware development throughout the western hemisphere.

The group has offices in the continental United States, Argentina, Bolivia, Brazil, Canada, Chile, Colombia, Peru, Puerto Rico and Mexico as well as distributors in the most important cities in the region.

Globalsat Group was named Latin America Satellite Communications Company of the Year in 2016 and 2017 by the highly recognized international consulting firm Frost & Sullivan and was also named “Company to Watch” in the category Emergency Response Mobility Satcom Innovation by the Mobile Satellite Users Association (MSUA).

For more information about the consortium, please visit: HTTPS://WWW.GLOBALSATGROUP.COM/

Iridium is the only mobile voice and data satellite communications network that spans the entire globe. Iridium enables connections between people, organizations and assets to and from anywhere, in real time. Together with its ecosystem of partner companies, Iridium delivers an innovative and rich portfolio of reliable solutions for markets that require truly global communications. The company has a major development program underway for its nextgeneration network Iridium NEXT. Iridium Communications Inc. is headquartered in McLean, Va., U.S.A., and its common stock trades on the NASDAQ Global Select Market under the ticker symbol IRDM. For more information about Iridium products, services and partner solutions, visit HTTPS://WWW.IRIDIUM.COM/ .