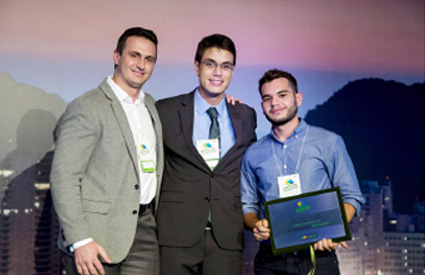 Elektro, one of the largest electricity distributors in Brazil, has honored Globalsat Group with an award which highlights its strategic importance as a partner

SAO PAULO, SAO PAULO, BRAZIL, August 10, 2017 /EINPresswire.com/ — Elektro, one of the largest electricity distributors in Brazil, has awarded Globalsat Group, the first Pan American satellite telecommunications services company, with an award which highlights its strategic importance as a partner who has evolved to meet Elektro’s growing and sophisticated communications on the move needs (COTM).

Iberdrola-controlled Elektro distributes power to 228 cities across one of the region’s most challenging territories. This involves 112 thousand kilometers of distribution networks operating in an area of 121 thousand square kilometers, including both heavily and sparsely populated areas. Throughout this territory, the company is in charge of 1.7 million poles and 140 substations, and critical to its mission is a fleet of over a thousand vehicles. Many of these vehicles need 24×7 communications no matter what, which is why Elektro counts on Globalsat for mobile L-band satellite service.

Igor Falcao, head of Globalsat do Brasil and Senior Vice President of Sales – Latin America of Globalsat Group, comments: “We are delighted and proud of this distinction. Working with Elektro has been a complex undertaking and has required that we maximize efforts across our local and international organizational structure from the get-go. The importance of power cannot be overstated, it’s as mission-critical as it gets and we have been able to deliver and maintain high availability mobile satellite PTT communications at an unprecedented scale in the region. This has allowed Elektro to minimize costs and maximize uptime through the constant and optimal availability of their distribution network servicing fleet.”

At the heart of the mission critical PTT solution that Globalsat Group provides for Elektro there is an intelligent PTT (Push to Talk) terminal, which makes efficient use of L-Band and terrestrial cellular services simultaneously, providing low cost voice connectivity when cellular is available and seamlessly switching to satellite service when or where cellular is not available due to geographic conditions or any other circumstance, including network congestion or failure due to natural disasters.

Distributed annually, the Elektro Supplier Award recognizes and disseminates the best practices of suppliers of materials and services, encouraging the continuous improvement of their processes, not only to meet the requirements of contracting services or supply of materials but also to promote total alignment with the Elektro mission.

Globalsat Group is the first multi-entity Pan-American mobile satellite service (MSS) provider and an industry leader delivering standard voice and data, M2M / IoT, software and hardware in the region since 1999. With offices in the United States, Bolivia, Brazil, Canada, Chile, Colombia, Peru, Argentina and Mexico as well as distributors in the region’s most important cities, the company provides satellite telecommunications solutions for thousands of customers through a flexible organizational structure, powered by extensive and specific expertise in multiple vertical sectors such as energy, government, defense, media, mining, banking, agriculture, NGOs and tourism. Most clients use these services in mission critical applications where infrastructure or lives are at stake, under extreme conditions or exceptional circumstances, when or where other means of communications cannot operate.

Globalsat Group has received the “2016 Latin America Satellite Communications Company of the Year” Award from the highly recognized international consulting firm Frost & Sullivan. Globalsat Group was also named “Company to Watch” in the category Emergency Response Mobility Satcom Innovation by the Mobile Satellite Users Association (MSUA) at the Satellite 2016 conference, for its role as a provider of satellite services for the tsunami detection and warning system operated by Chile’s government, through the local subsidiary Globalsat Chile.

Recognized eight times in the last nine years as the Best Electricity Distributor in Brazil, six times as the Best Company to Work in Brazil and three times in Latin America, Elektro is an Iberdrola Group Company, 5th largest energy group in the World. With operations in 228 municipalities, 223 in the State of São Paulo and five in Mato Grosso do Sul; it serves more than 6 million people.

This press release can be viewed online at: http://www.einpresswire.com Disclaimer: If you have any questions regarding information in this press release please contact the company listed in the press release. Please do not contact EIN Presswire. We will be unable to assist you with your inquiry. EIN Presswire disclaims any content contained in these releases. © 1995-2017 IPD Group, Inc. All Right Reserved.